Welcome to another 3QQ post. This time I had a chance to chat with New York Times Bestselling author Stella Cameron about her new eBook release FRENCH QUARTER and the re-release of KEY WEST. 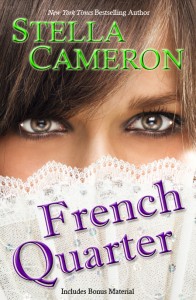 Available on Kindle and Nook!

The shocking death of her employer and patron Errol Petrie, the excesses suggested by the murder scene, and the investigation that is sure to follow are just some of the pieces of Celina Payne’s nightmare. And the last man she trusts is now the only man she needs.

Errol’s business partner and friend Jack Charbonnet, is powerful, enigmatic, and not about to let Celina hide from the truth. Somebody in New Orleans’ French Quarter killed Errol and Celina Payne tops the list of suspects. Jack’s past is as mysterious as the sultry bayou. He is said to be too dangerous to know, and deadly if crossed. Jack holds the key to Celina’s deliverance or her destruction…

Originally published September 1998 in hardcover by Kensington and June 1999 in mass market paperback by Zebra Books.

1.What drew you to write about the bayou?

I’m a jazz addict. I visited New Orleans for the jazz festival years ago and caught the Louisiana bug. The actual bayou country is mystical.  If you stand still in what you at first think is silence, you realize you’re assaulted by a thousand subtle noises, from bugs flitting in the Spanish Moss, to air bubbles popping in green-coated water–and all those other things that inhabit nooks and crannies you may miss if you don’t look carefully.  This is the perfect setting for mystery, drama, love, hate, and incredible passion.

How could I stay away from such a fertile story ground?  FRENCH QUARTER melds  action in the old city with the pull of the bayou, and the stakes are scary, but magnetic, I think.

2. FRENCH QUARTER features bonus material about your re-release KEY WEST. Can you tell us more about it?

KEY WEST is now available as an e-book.  This is one of those stories that left me feeling I had used upall the emotional energy I’d ever have, but it was worth every moment of the telling. 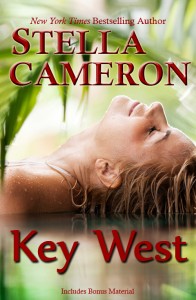 Sonnie Giacano is lost in Key West.  Deserted by her wildly ambitious husband, trying to recover from a horrific  event she knows was no accident, she grapples to expose a sinister plot intended to kill her.

Cynic running from his own demons, ex-NYPD cop Chris Talon wants no part of Sonnie’s case but he smells a dark plot against her, and is drawn into her harrowing world.

Nightmarish flashbacks plague Sonnie.  Does she really hear what she hears and see what she sees?  Sonnie and Chris put their lives on the line and her nightmares come closer and closer to becoming reality . . .

Next month you’ll have a chance to read a sequel to KEY WEST—this is exciting to me!

3. What’s next on the horizon?

GLASS HOUSES, the sequel to KEY WEST will be released in eBook next month. Currently, I’m hard at work on a paranormal series for Grand Central, The Chimney Rock Books. The first of these, DARKNESS BOUND, is set for release at the end of February.

Thank you so much for this the invitation, Dara.

My pleasure Stella. Find out more from this prolific author on her website or visit her on Facebook.

In this special blog feature I am highlighting the amazing authors whose stories are in  The Christmas Tales Bundle. Author Susan J Kroupa describes herself as a grandmother, writer, amateur musician and dog lover (you’ll see how much below). As a fellow music lover I was drawn to her beautiful tale and pleased she put time […]