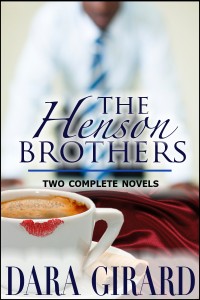 Don’t know about Drake or Eric Henson yet? Like a bargain? Then you’ll enjoy a chance to read two classic novels in one volume. It’s called THE HENSON BROTHERS and includes these two novels:

TABLE FOR TWO
After a disastrous weight-loss program and devastating divorce, self-help author and teacher Cassie Graham has given up on diets and men. So when she meets reclusive restaurant owner, Drake Henson, a man with gorgeous eyes and a sexy grin, who has a bigger appetite for food than she does, she’s ready to resist her attraction and run for cover.

Drake Henson knows all about running. For the past several years he’s tried to distance himself from his past and the struggle of raising his two younger siblings on the streets of DC. When he takes one of Cassie’s classes to improve his social skills, he experiences his first taste of true desire. Now he just needs to convince Cassie that  he’s the man she can trust and only the size of her heart matters.

GAINING INTEREST
Aspiring lingerie designer Adriana Travers has a weakness for bad boys—not practical, plodding men like her financial advisor Eric Henson. She’s only interested in him handling her financial affairs. Affairs of the heart, however, are completely off limits.

Eric Henson agrees. Women like Adriana are not in his plan. After spending years working his way up the business ladder, he wants to marry a woman who will keep him on the right path—not prove a distraction. But one night changes everything.

When Adriana treats him to a night out for his birthday, Eric starts to see Adriana in a sexy new way that just might upset all his carefully laid plans. And Adriana sees a wicked side to Eric that makes her heart pound. Soon she’ll discover that when it comes to being bad, Eric’s a lot more than he seems.

(Includes a clickable Table of Contents)

You can buy THE HENSON BROTHERS: TWO COMPLETE NOVELS at Amazon, Barnes and Noble and other retailers.

A print version will come out later in the year.