The Dairyman and the Gentleman

It was a rainy day in Seattle when I first saw him. I’d planned on reading that day, but my aunt’s dog had chewed up one of my favorite books and I was in a rather foul mood. So I turned on the TV and a man walking with a lame horse appeared on the screen. He was talking to me about his town of Anatevka and the traditions there. Soon I got to meet his wife Golda and his five daughters: Tzeitel, Hodel, Chava, Sphrintze and Bielke.

I watched the movie Fiddler on the Roof transfixed. I was ten, but I knew these people. I knew this man. I knew his connection to tradition, faith and family; his sufferings and hopes. I could relate to his thirst for knowledge and riches. The fact that he was Russian, Jewish, and poor meant nothing to me because on the most basic level–the human level–I could relate.

Tevye and his family taught me about life. Their story about grappling with identity and change was

something I, a child of immigrants, could identify with. From early childhood I was told about the importance of our family name and listened to the many stories of my grandparents and their grandparents. I had a responsibility to keep the family name from shame. I know that to some this is a foreign concept, especially in America, which prides individuality over anything else.  In Fiddler on the Roof I saw the daughters struggle with trying to deal with individual identity versus family identity, something I dealt with growing up and saw all around me especially among other immigrant families we knew. When I read the stories in Tevye the Dairyman and Tevye’s Daughters on which the movie is based, I was heartbroken by the stark realities of their lives (outright depressed sometimes).

In that moment I knew the power of stories. I knew that one day I wanted to add my voice to this fascinating conversation. But it took me awhile to figure out how I could do it.

Then I saw another movie that helped make things click. It was a year later, I was older (eleven) wiser and already writing novels. I didn’t realize then that by age twelve I’d start submitting my work to editors, but I hadn’t reach that point yet. It was a clear sunny day and I was no longer in Seattle, but  in the Maryland suburbs. I’d finished playing outside with my friends and wanted something to watch so I turned on the TV.  A black and white movie came on.  I saw an attractive looking man being cruelly rejected by a woman.

It was his expression that captivated me (I later learned the actor’s name was Laurence Olivier and the woman was Greer Garson) and I was hooked. I needed to see what happened next. Why had she rejected  him? Why had he asked her if she hated him that much? I watched the rest of the movie then I convinced my mother to take me to the library so that I could check out Pride and Prejudice. That’s how my love affair with Jane Austen began (although I admit it hit a rough patch with Mansfield Park that’s when I briefly left her to have a fling with Charlotte Bronte and Jane Eyre, but that’s another story).

Just like with Fiddler on the Roof I was intrigued by the father, Mr. Bennet, and his five daughters: Jane, Elizabeth, Mary, Kitty and Lydia. Through this story I learned the importance of ‘decorum’, ‘duty’, ‘family honor’, and ‘marrying well’ and again I could relate. These were (still are) the guiding principles my family instilled in me.

couldn’t live up to writing the story I’d been dreaming about for so long. I didn’t want to just do a modern tale of Pride and Prejudice or Fiddler on the Roof. I didn’t want my main protagonist, Janet, to just be an updated replica of Elizabeth or Hodel. I struggled for years on how I could create my own story while still honoring the memory of those who’d influenced me.

Then one day I started working on a fun (for me) story called Taming Mariella, which was my own spin on The Taming of the Shrew. After writing this story I realized that Janet could still have her own hopes and fears, while also coming from the same literary tradition as her predecessors. So I took the leap and wrote my first women’s fiction: The Daughters of Winston Barnett. A story about an immigrant father, Mr. Barnett, and his five daughters: Beverly, Janet, Francine, Trudy, and Maxine.

I thought of it as Pride and Prejudice meets Fiddler on the Roof with a Jamaican-American twist. 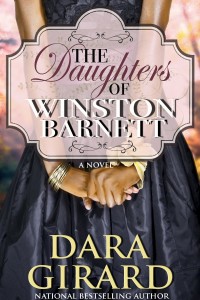 Like Tevye, Mr. Barnett is a man in conflict trying to hold on to tradition in a changing world. Like Mr. Bennet, unfortunately, he’s a little clueless about what his daughters are really like and somewhat careless about who he welcomes into his household. But he is also his own man. He likes to listen to Elvis and eat his favorite snack of bun and cheese with a hot cup of ginger tea.

With this story, I hope, as I learned all those years ago, that readers will see that no matter how different we may seem, weren’t not so different after all.

I plan to have this book hit the virtual shelves by the end of November and have the print version follow soon after.

New Release: Dream of Me

Dream of Me is now available in both eBook and print. Get your copy here.